Billy Hasler-Cregg, Technical Apprentice, has been shortlisted in the ‘Young Employee of the Year’ category at Burnley Business Awards 2019.

Billy, 22, began his career with us in 2017 as a Technical Apprentice. He had previously played as an academy footballer for Burnley FC from age 7-16, before joining Rochdale AFC as a professional footballer.

Upon receiving the news that his contract with Rochdale AFC would not be renewed when he was 19 years old, Billy was forced to re-think his future career plans.

After speaking with a relative who worked in the construction industry, Billy decided to look at the options available when he discovered – and subsequently accepted – a vacancy with us  in October 2017.

For the first eight months, Billy admits that he found it difficult to settle in to the role and questioned if he had made the right choice. In time, Billy was given more and more responsibility and began to enjoy the challenges that were presented.

Billy is now an integral part of our  team and has progressed quickly, giving him a newfound sense of professional purpose and direction.

The Calico Group supports young people into employment through apprenticeship opportunities across their diverse sectors, with approximately one in ten employees being apprentices.

Billy said: “After leaving professional football I struggled and was in a really dark place. I’m proud of both my professional and personal progression since joining Ring Stones, which has been influenced massively by the people I work with here. From someone with no background in construction, to essentially managing my own department in 18 months shows how the company trusts and nurtures young people to enable them to be successful.”

James Macaree, Assistant Director at Ring Stones Maintenance and Construction, said: “Since Billy began his employment with Ring Stones, it was evident to see that he had a real passion and drive to succeed. Although the initial period was tough for Billy, he has managed to overcome these challenges and establish himself not only as a key member of the team but also play a pivotal role in our success. It has been a pleasure to work alongside Billy and I look forward to seeing him develop over the years to come.”

To find out more about careers at The Calico Group, please visit https://calicojobs.co.uk/ 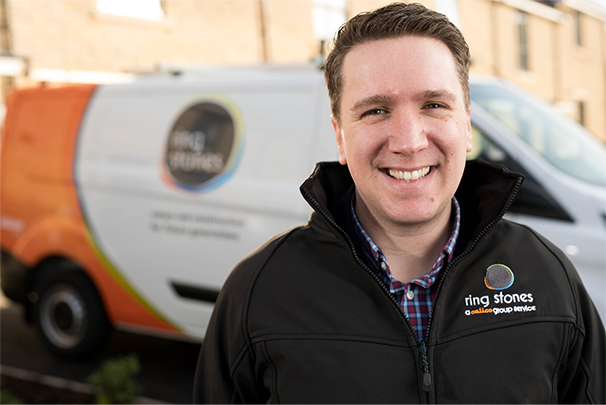 For more information or to find out how we can help you please call our team on 0300 303 3968 or email info@ringstones.co.uk